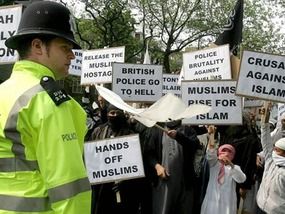 I have noticed that when certain people or individuals speak out against the evils of Islam, the Left have the same tactic of calling them “a racist,” but this is actually an anomaly because Islam is not a race but rather a religion – all be it a violent religion bent on world domination.

So the next time you have the courage and goodness inside you to speak out against the evils of Islam – telling them that there are around one hundred references in the Quran which calls its followers to violence – and someone tries to smear you with the brush of “racist” tell them the truth – ISLAM IS NOT A RACE BUT A RELIGION – A RELIGION OF VIOLENCE NOT PEACE!

That should keep them quiet for a while – see this is the same tactic of the devilish way they use and have coined the word, “Islamphobic” or “Islamphobic” to try and silence the true evil face of Islam – which is a death cult and not a religion of peace but a religion of extreme violence bent on world domination by extreme violence. It is a political world domination death-cult of a violent religion.

This is the same devilish tactic the Left use when they use and misapply that word, “homophobic” and “homophobia” to Christians and Jews when they also speak out about the real truth and harm of homosexuality. They use this tactic to silence their enemies, and thanks to the evil politically correct era, we have been living in for a generation, it has worked – but now we can be more street-wise, because we have wised-up to the Left’s evil tactics.

So please, be aware and tell them the truth, in love, that you don’t hate gays or Muslims but you hate the teaching they are spreading which is against the sound and healthy teaching of both Christianity and the Jewish faith.